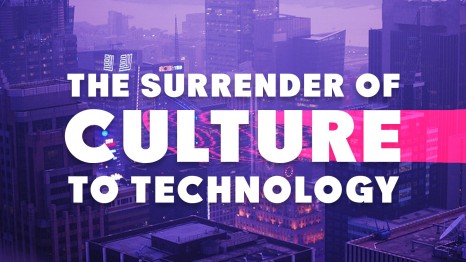 Before we proceed in this chapter summary, defining three terms will aid our understanding of this book’s subject.  First, there’s Technology which has to do with knowledge that is practically applied through scientific and mathematical principles.  It is a means of accomplishing a task using technical methods, or knowledge.[1]  Second, there’s Technocracy which concerns individuals who through their knowledge and power manage a society—sometimes coercing it with its wishes.[2]  Lastly, there’s Technopoly which according to Neal Postman is a state of culture and mind where technology is deified; the culture finds its satisfaction in technology and takes its orders from it.[3]

In this chapter Postman begins by pointing out how throughout time scholars have tended to encapsulate eras by taxonomies (I.e., categories, nomenclatures, etc.), such as the Stone Age, the Iron Age, and the Steel Age, or the Industrial Revolution or Post-industrial Revolution.  Again, some have written of Oral Cultures, Typographic Cultures, and Electronic Cultures.  In the 1960’s one wrote of the Age of Gutenberg compared to the Age of Electronic Communication.  These categories are coined in order to capture the character of an age or a culture.

As a means to clarify where we’ve been and where we’re at, Postman classifies cultures into three types: tool-using cultures, technocracies, and technopolies.  Each type of culture can be found somewhere on the planet.  He notes that until the 17th century all cultures were tool-making cultures.

These tools were created to first solve problems of the physical life (e.g., the use of water power, windmills, etc.) and second to serve the symbolic world of (e.g., art, politics, religion, etc.).  These were created and governed by beliefs that gave said tools the boundaries for their use.  For example, in military technology the use of the Samurai sword and the crossbow were controlled by spiritual views and social customs (Pg.23-24).  Depending on the situation, the samurai warrior was to either use his katana (long sword) or his wakizashi (short sword) and the knight was prohibited or allowed to use the crossbow.

Postman continues explaining that not only do worldviews govern the use of tool making cultures, but also how new tools forever irreversibly change cultures.  Among the examples used, three I note are: the rifle which replaced the bow and practically eradicated a culture; the mechanical clock which changed our view of time and thus how industry is conducted; and the telescope which changed our view of the heavens and put Christian theology into question (Pgs.26-34).

Postman further notes that Francis Bacon understood how the printing press changed literature, how gun powder changed warfare, and how the magnet changed navigating the seas (Pgs.36-37).  At the end of the day, for Bacon there was a direct link between: invention and progress.  This is noteworthy because that same sentiment rules 21st century Western civilization.  Sometimes it’s a friend, and sometimes it’s a foe.  Consumer beware.

[3] Neil Postman, Technopoly: The Surrender of Culture to Technology, Pg. 71, © 1992 by Neil Postman, a Borzoi Book, Published by Alfred A. Knopf, Inc.