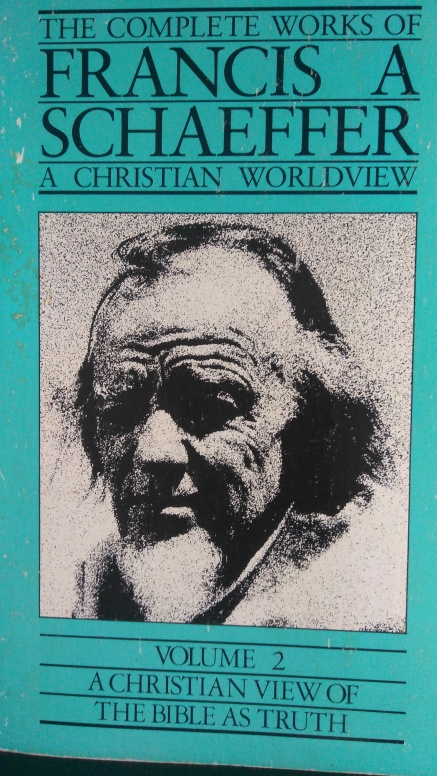 In No Final Conflict, Schaeffer among other things argues for the primacy of the Bible as God’s final self-disclosure to man which is both transcultural, and trans-time.  While special revelation (i.e., the Bible) shows us God’s redemptive plan, general revelation (i.e., the Creation) displays the other aspect of His glory.  When theologians and scientists relegate the Bible to the mere subjective, relativistic corner, it is held that only science can give us knowledge.  However, the Scripture’s self-affirmations don’t give us this capital.

Where the Bible touches on History and the Cosmos it gives us true knowledge, if not, then Evangelicalism is a sham, grounded merely on a weak view of Scripture.  If Scripture is not faithfully applied to the raging culture war, he quotes Martin Luther:

“If I profess with the loudest voice and clearest exposition every portion of the truth of God except precisely that little point which the world and the Devil are at the moment attacking, I am not confessing Christ, however boldly I may be professing Christ.  Where the battle rages, there the loyalty of the soldier is proved, and to be steady on all the battle front besides, is merely flight and disgrace if he flinches at that point.” [pg.122]

Schaeffer further argues for the Bible’s historicity through the unity of Genesis in its genealogical statements, the nature of Scripture, the limits of our knowledge of both Special and General Revelation and the need to humbly ascertain the two.  At the end of the day, if Evangelicals acquiesce to a weak view of Scripture (i.e., it’s a myth, not a reliable source of historical knowledge) then God will in the end not have spoken.  Only man will have spoken through his culturally conditioned era.

If this weak view of Scripture is received and practiced, the difficulties that lie ahead will wipe out many professing believers, AND the lost will not be found.  Instead they will dance into eternity without the redemptive knowledge of God, but only into His wrathful presence.

We need Holy hot orthodox boldness so that we may winsomely love our neighbor and lay down our lives for them.  Gone are the days where we can leave said decision for tomorrow, the time to act is now, the time to truthfully love as God commands is also now.  What will the Master say to us when on that day our faces meet?  Well done good and faithful servant enter into the joy of your master, or, depart from me I never knew you, you workers of iniquity.

2 thoughts on “Summary of “No Final Conflict” Francis Schaeffer”