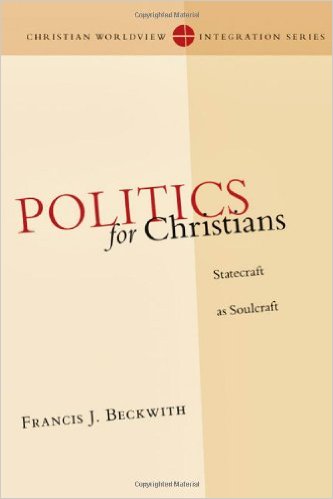 Beckwith here explores whether or not it is reasonable to hold, as the founding fathers did, that natural moral law requires God’s existence.  He considers the atheistic, theistic and Biblical view as to its origins (Hobbes, Locke, and Aquinas were major contributors to our understanding and disputes).  Beckwith explains that it’s reasonable to believe in natural law being grounded in God’s existence and since the existence of God is a philosophically defensible position, one may legitimately claim it as an item of knowledge.  Thus, those who reject said position, aren’t unreasonable for doing so, yet neither are those who accept it.

Beckwith considers contemporary atheism and some of its key players (E.g., Hitchens and Dawkins) and sees an inconsistency with their worldview and natural rights.  That is, atheism essentially affirms that we are accidental, purposeless, pieces of meat who when we die we’re done.  Humans have no intrinsic value in and of themselves and yet when moral dilemmas arise who cares if there’s agreement or disagreement because there’s no purpose or meaning to life.  But people like atheists deeply care about their views and thus betray their worldview unwittingly.  That’s an oversimplification of what Beckwith considers [pgs.148-152].

Beckwith then considers why moral natural law suggests God.  He holds that God’s existence best accounts for said laws and are most at home in a theistic universe for these objective moral values are grounded in God, the Designer, the Supreme Being (even if Christendom is rejected, some ultimate being grounds natural law).  There are really only two options to buttress the origins of Human dignity and rights; (a) its either accidental, a chance result, or (b) its the result of intelligence.

If it’s accidental then why obey a mindless principle?  Beckwith then considers evolutionary arguments for said position that are merely descriptive, not prescriptive and there’s the rub [pgs.152-157], for that worldview only explains what is not why it is and that is precisely the realm of morals (e.g., what we ought and ought not do).

If it’s the result of intelligence, then we have an explanation that fits most consistently with human experience.  For we obey “beings” not “principles”, we fulfill our duties toward those whom are owed, the objects of which are persons, not accidents.  Beckwith continues and considers examples that have been used to ground these laws in Scripture [pgs.158-162].

He concludes the book with a wise reminder that while politics is not everything, it is not “nothing”.  It is often messy and filled with conflict, but so is much of life (e.g., family, work, school and church).  Thus he ends with words from Ecclesiastes that are often quoted, but not often reflected on: