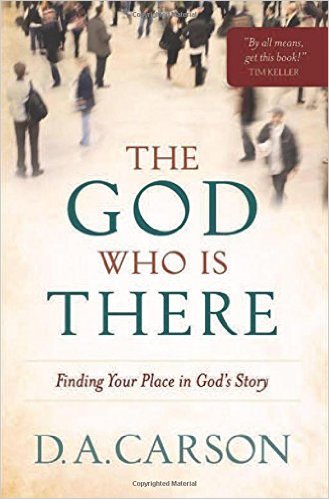 Carson begins this chapter by first pointing out that before Jesus was born, the prophet Jeremiah promised a new covenant.  What this promise implicitly says about the old (Mosaic) covenant is that in some sense, it is becoming obsolete (Jer. 31:31-34):

Secondly, Carson explains how in Jesus God became human.  For starters, “Jesus’” name means “Yahweh saves.”  This is the covenant name of God given to Moses at Sinai.  The importance of this name in Mathew’s gospel is that it sets forth the entire theme of the book; namely that Yahweh has come to save his people from their sins (in Christ).

He then explains the doctrine of the Trinity to mean that the Father, the Son, and the Holy Spirit are God.  Not three Gods, only one.  One way of explaining this, is that the Word shares one substance with the Father, but is distinguishable from Him.  That is, there are three distinct persons within the Godhead who are equally the One God, co-existing, co-equal, and co-eternal.

In John’s prologue (John 1:1-18) it’s clear that the “Word” is simultaneously God’s own peer and God’s own self?  In verse 1 this is emphatic: “In the beginning was the Word, and the Word was with God, and the Word was God.”  God reveals, himself to the prophets through his word; God creates through the spoken word in (Gen.1; Ps.33:6); God transforms his people through the word (Ps. 107:20), and Jesus is God’s self-revelation, self-expression; God’s own agent in creation; and he comes to save and transform his people.

Thirdly, Carson explains what the incarnation means.  It means that the Word becomes a human being (i.e., the infleshing). God becomes something that previously before the incarnation, he was not.  What John does not say is that the Word merely clothed himself in animal humanity, pretended to be human, coexisted with a man called Jesus, nor is all of God exhausted in Jesus.  But John does say that the Word (God’s own peer) became a human being.  Jesus is the “God/Man.  God in his divinity cannot change, but in Christ’s humanity there’s a distinct addition: a human nature.  This is mind baffling.

Fourthly, Carson makes the connection between the Old Testament Tabernacle and New Testament incarnation.  He does this by thematically connecting John 1:14-18 on the one hand and Exodus 32-34 on the other hand.  He explains that the Tabernacle and Temple, point to the fact that Jesus is the ultimate meeting place between a holy God and rebellious sinners.  He is said to have “tabernacled among us”.  This is where the meeting place of peace with God can be found in Jesus Christ.

Glory is what Moses wanted to see of God on Sinai, but when Jesus tabernacled among us the wonder of his glory, God’s glory, is seen in the miracles and ultimately on Calvary’s tortuous bloody cross.   Grace and Truth (Love and Faithfulness) God reveals himself not only as the One who punishes evil doers but is also kind and forgiving.  Full of grace and truth is that which brought him to the cross to pay for our sins.  Here is where justice and love kiss!

Grace and Law means that we have received grace in place of grace already given.  The gracious gift of the Law was superseded by the ultimate revelatory expression of God in the 2nd person of the Triune God who through his sacrificial death on Calvary’s bloody cross purchased the redemption price required for wrath doomed sinners to be rescued and thus adopted into God’s family.  It’s found in the new covenant, which replaces the old covenant.

Seeing God can only be accomplished through seeing Jesus. We cannot look directly on God, according to John 1:18.  What is at present, the closest we can come?  Presently, we can see the character, holiness, wrath, forgiveness and glory of God in Jesus.  He is the ultimate revelation of God the Father—he is the incarnate son of God.

And as such, Jesus most spectacularly showed that he is full of grace and truth on the cross.  Both God’s justice and love are fully expressed there.  This field will forever be marveled on by the redeemed age without end.