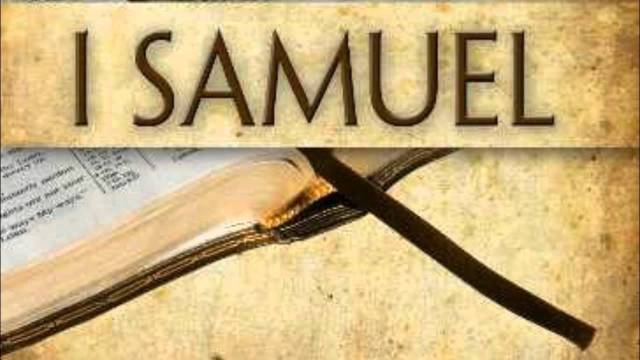 This chapter is perhaps one of the most loved and least understood in all of the Bible by both believers and non-believers alike.  It’s the story of David and Goliath, the underdog facing insurmountable odds for success.  It’s a story of courage under fire where the dream is truly impossible to attain.  It’s a story of a boy coming of age in battle demonstrating his mettle.  The above is true.  It’s more than just a story, but one that happened in space time history.  But this story rather than primarily focusing on the characters, the observant reader will note that it’s about the very present Author.

The story unfolds with the Philistine armies set in battle array in Socoh and across the valley Saul and Israel were camped in the valley of Elah.  Goliath, a nine foot specimen of a man, a fierce warrior and ominous presence taunted Saul and Israel’s army’s to come and fight him for forty days (1-7)

8 He stood and shouted to the ranks of Israel and said to them, “Why do you come out to draw up in battle array? Am I not the Philistine and you servants of Saul? Choose a man for yourselves and let him come down to me. 9 If he is able to fight with me and kill me, then we will become your servants; but if I prevail against him and kill him, then you shall become our servants and serve us.” 10 Again the Philistine said, “I defy the ranks of Israel this day; give me a man that we may fight together.” 11 When Saul and all Israel heard these words of the Philistine, they were dismayed and greatly afraid.

Like the scene in the movie “Troy” where one kings’ star warrior challenges the opposing kings’ champion fighter to determine who’s king will be served, so also in this account the same obtains.  But unlike the figure of Achilles—known for his fierce battle skills, David—the son of Jesse—the shepherd youth comes forth as the unexpected and unknown hero—or so it seems (Vv.12-19).

After a month of Goliath’s taunts David comes on the scene and inquires what the problem is, what the reward for killing Goliath is and then takes on the challenge (Vv.20-25).  It seems that for Eliab his brother, David was a despicable nuisance and perhaps sibling rivalry’s obtained growing up (Vv.26-30).  It seems however that David understood something Saul and Israel had forgotten—they were God’s covenant people, the Philistines were not:

“Then David spoke to the men who were standing by him, saying, “What will be done for the man who kills this Philistine and takes away the reproach from Israel? For who is this uncircumcised Philistine, that he should taunt the armies of the living God?” (V.26)

To be circumcised in Israel hearkened back to the God of the fathers who fought many battles for Israel and would continue to do so even that day.  He is Yahweh, the God of the covenant who overthrew Egypt’s mighty armies and is unchanging.  So David recalls Israel’s historical past but recalls his as well.  This youth, the shepherd boy going up against this seasoned warrior, gives a brief biography that’s telling:

32 David said to Saul, “Let no man’s heart fail on account of him; your servant will go and fight with this Philistine.” 33 Then Saul said to David, “You are not able to go against this Philistine to fight with him; for you are but a youth while he has been a warrior from his youth.” 34 But David said to Saul, “Your servant was tending his father’s sheep. When a lion or a bear came and took a lamb from the flock, 35 I went out after him and attacked him, and rescued it from his mouth; and when he rose up against me, I seized him by his beard and struck him and killed him. 36 Your servant has killed both the lion and the bear; and this uncircumcised Philistine will be like one of them, since he has taunted the armies of the living God.” 37 And David said, “The Lord who delivered me from the paw of the lion and from the paw of the bear, He will deliver me from the hand of this Philistine.” And Saul said to David, “Go, and may the Lord be with you.”

God had been preparing David for this fight for many years and through many difficult trials.  It was in said crucible that David the youth learned to trust in the God of Creation and the Covenant.  Thus, this situation would be no different; instead of killing a lion and bear who threatened David’s sheep, he would be killing the elite warrior who for forty days had been threatening and terrorizing his people Israel.

Goliath came out with full battle armor and sword, but David with five stones and a sling.  After Goliath’s many taunts and scorn, David replies with a promise of his doom based on the status and purpose of Yahweh:

45 Then David said to the Philistine, “You come to me with a sword, a spear, and a javelin, but I come to you in the name of the Lord of hosts, the God of the armies of Israel, whom you have taunted. 46 This day the Lord will deliver you up into my hands, and I will strike you down and remove your head from you. And I will give the dead bodies of the army of the Philistines this day to the birds of the sky and the wild beasts of the earth, that all the earth may know that there is a God in Israel, 47 and that all this assembly may know that the Lord does not deliver by sword or by spear; for the battle is the Lord’s and He will give you into our hands.”  48 Then it happened when the Philistine rose and came and drew near to meet David, that David ran quickly toward the battle line to meet the Philistine.49 And David put his hand into his bag and took from it a stone and slung it, and struck the Philistine on his forehead. And the stone sank into his forehead, so that he fell on his face to the ground.  50 Thus David prevailed over the Philistine with a sling and a stone, and he struck the Philistine and killed him; but there was no sword in David’s hand.51 Then David ran and stood over the Philistine and took his sword and drew it out of its sheath and killed him, and cut off his head with it. When the Philistines saw that their champion was dead, they fled.

David went from being an obscure youth to the champion of Israel, but little did he know what trials his faith in God and courage would bring into his life (Vv.52-58).

David had a relationship with God that was vibrant, not static.  He walked with God from his youth and when the time came he glorified the God of heaven, the God of Abraham Isaac and Jacob.  The thrust of this account is not that we need heroes; that underdogs can have their day; that courage requires one to be in battle; etc.  I think God through the Holy Spirit is saying to his people even today that regardless of the opposition (be it great or small) you can trust that I’ll be there to deliver you according to my purposes for the glory of my name so that the nations will know there’s a God in Israel who has ultimately revealed himself in Jesus Christ of Nazareth.

May a youth movement be raised up in these last days LORD who will dare to walk with you and not be distracted with the Goliaths of our day, may they so be filled with an understanding of your word that when the time to act in righteousness arises, they don’t back down but trust in your presence to deliver according to your purposes, not theirs.  And may those saints who have walked with you for years, who have lost a passion for your kingdom, find the fire of heaven they once imbibed to glory of your matchless name!