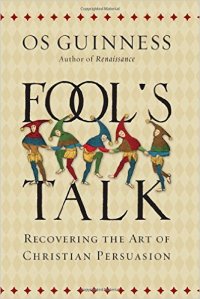 Having the message of the Gospel is one thing, but the ability to communicate that message effectively is another.  Os Guinness has written a book that aims at accomplishing the aforesaid.  Thus, I’ll be providing chapter summaries of this book in order to give you the “kernel” of his message, with the hope that you’ll actually get the book and read it yourself.

CHAPTER 1: CREATIVE PERSUASION             In this timely book by Os Guinness in a day where in America the light of the Gospel seems to be increasingly lost in our churches and in the culture, the author reminds us that to effectively do our apologetics and evangelism, we must as God’s people recover the art of Christian persuasion.

Persuasion is an art [and science] that the biblical writers employed in different times and for different purposes when communicating the word of God.  Unfortunately, this art has been lost to us in our apologetics and evangelism.  We must not only re-engage the enterprise of apologetics/evangelism as Scripture reveals, but we must also make it our goal to persuade people.

In an age of acute self-promotion (E.g., media freaks) or hyper Narcissism, how do we reach the indifferent, belligerent, enemies of the Gospel with the message?  Guinness answers this question by several observations.  First, we must start by understanding the nature of unbelief.  Second, we must look at how God addresses unbelief.  Third, we must reach unbelievers where they’re at, not where we hoped they would be.  And lastly, we must go to the core problem—the heart!

Os argues that we must go directly to Scripture as a model of how we are to communicate to unbelievers.  To persuade he sees the need to be situationally prepared, always considering the audience.  Two examples he uses are of King Ahab and how one named prophet and another unnamed prophet deal with his mulishness.  The former seems to use mockery, the latter acts out a parable.  Both get their point across to Ahab by using his words to indict him.

Guinness then instructs the reader to keep in mind five “pillars” of the Faith when persuasion is the goal of our message: creation, fall, incarnation, cross, the Spirit.  Creation reminds us that people can reason, but their hearts are primary. Fall prompts us to the truth that humans are truth suppressors. Incarnation takes us back to the way Jesus most impacted people and that was through “one-on-one” personal interaction.  There’s no greater means of persuasion.  Cross tells us people’s greatest need is to behold a “Cross-centered” Gospel.  Holy Spirit is present to empower the execution of persuasion and we must rely on Him.  See quote on the Spirit’s activity (Pg.28)

One thought on “Fool’s Talk: Recovering the Art of Christian Persuasion by Os Guinness”