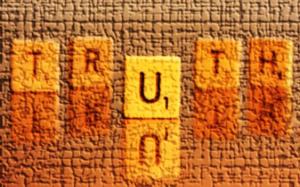 In part one of True Truth and Why it Matters, I mentioned first that truth is—that which corresponds to reality, and without truth there’s no Christianity—a position the Scriptures teach.  In part two I considered that a belief is a state of mind where trust is placed in a person or thing held to be true, that beliefs are unavoidable and yet beliefs are not created equal.  In part three the issue under consideration is whether or not truth is real, and if it is, can it be known.

WHAT ARE PEOPLE SAYING ABOUT THE ISSUE OF TRUTH?

Christian writer, lecturer and social scientist, Dr. Os Guinness on a talk he gave at Cambridge University, considers whether there is any truth and if so, how we can come to know it, and says:

“…the most common motto in all the universities of the world is ‘the truth shall set you free’. But while that adorns the walls, it no longer animates the minds of many people in the West. Truth is highly controversial.”[i]

“The fact is the higher the education, the more brilliant the mind, often the slipperyer [sic] the rationalisations [sic]. In other words, humans are not only truth seekers we’re also, let’s be honest, truth twisters. And there’s two ways you can always handle truth. We can try and make the truth conform to our desires of reality or make our desires conform to the truth of reality.” [ii]

The Apostle Paul in the book of Romans speaks of what Guinness says we do and are: truth twisters.  Consider these ancient words:

“18 For the wrath of God is revealed from heaven against all ungodliness and unrighteousness of men who suppress the truth[iii] in unrighteousness, 19 because that which is known about God is evident within them; for God made it evident to them” (Rom.1:18-19)

According to the God of Scripture truth matters and suppressing it is cause for his wrath.  These propensities lie within all human beings.  Its’ part of what Christian theologians call “The Fall” where Adam and Eve rebelled against God’s holy command and thus sin entered the world.  Despite this tragic event, God’s gift of logic while tainted nevertheless remains to aid our discovery of the real.

Thus to answer the question: is truth real and can we know it? , we must first consider the nature and utility of logic and then (to read more click→define what we mean by truth.

[i] Os Guinness lecture “Truth—How Can We be Sure about Anything”  http://www.bethinking.org/truth-tolerance/intermediate/truth-how-can-we-be-sure-about-anything.htm (accessed 2/19/2014)