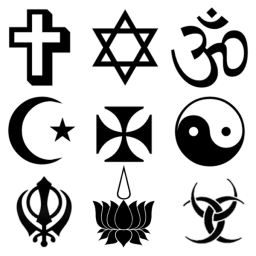 The way to not respect a religion’s truth claims is to misrepresent it.  If I’ve heard it once I’ve heard it a hundred times over that “all religions essentially teach the same message”, and therefore should be “equally respected”, because to do otherwise is “intolerant, bigoted, arrogant, antiquated, blah-blah-blah” ad infinitum, ad nauseam.  Here’s how I would address this understanding.

First, my response to the truth claim that “all religions essentially teach the same message” is that if it’s true, everyone then should believe it.  That is, if in fact all religions (or worldviews) are teaching the same message then to disagree with this truth claim is not just false but immoral.  For whenever the term should is used, a moral ought, necessarily follows.

But how can this be true when the concept of God in monotheism, polytheism, atheism and monism contradict each other?  In logic we know for certain that when a contradiction appears, there’s a falsehood lurking.

Thus, to say that every religion (or worldview) is basically teaching the same message is not only false but also immoral—we ought not believe this claim to be true.  Perhaps the above mentioned views are all false, but they all can’t be correct in their truth claims specifically because they contradict each other.

On the one hand consider Monism’s view that our view of reality actually is an illusion, while Christianity’s on the other hand is that the senses are not illusory but actually aid us in the discovery of the real.  Which one has more explanatory power according to not only logic but also experience?  Not the former but the latter view.

Christianity nor any other religion should be believed if it’s not true.  We don’t respect liars, posers or counterfeits and for good reason—truth does not support them.  We value truth when we balance our check books (a vanishing practice indeed), shop for cars, compare prices to purchase a home or when considering a vacation destination.  We should also value truth when considering religious truth claims.

Third, my response to “if all religious truth claims are not equally respected then one is intolerant, bigoted, arrogant, antiquated, blah-blah-blah” is to direct them to what has already been stated above and put the burden of proof on them—since they disagree with my view are they not therefore actually describing themselves toward me?  Name calling, ad-hominem and straw-man arguments don’t foster civility but hatred.

Thus, the way to not respect a religion’s truth claims is to misrepresent it, pure and simple. Consider ATTQ’s Primer Chart on Logic under our resources for further inquiry.